This article appeared in the World Fence News. It describes how the Barbed Wire Dispenser was used on a commercial chain link installation project shortly after it was developed.

Completing a 27,000-lineal-foot chain link job in 60 days would be fairly routine for most sizeable fence contractors. Delta Fence and Construction of Escanaba, Michigan agrees, unless the job was located in the snow country of Michigan’s Upper Peninsula and you couldn’t start the job until September, which is the usual onset of the area’s “Arctic style” winter.

Well, nobody ever said fencing was going to be easy, and with that in mind, Jeff Lancour and Ron Chouinard, co-owners of Delta Fence, successfully bid the job and prepared for “battle.”

The project is located at Gogebic/Ironwood County Airport, which is on the Michigan/Wisconsin border, just a few miles from Lake Superior.

As mentioned, this type of project would have been fairly routine, except that the airport’s proximity to Lake Superior means that it bears the full brunt of the “lake effect” blizzards which dump feet (not inches) of snow on the area each winter.

According to Lancour, there was a certain amount of urgency to the project, for several reasons. First, security for the runways was “totally lacking,” not a good thing in today’s security conscious environment. But the security was needed not only to foil potential mischief makers, but to restrict the hundreds of deer which roam the area and make takeoffs and landings treacherous. The Federal Aviation Administration made a grant available to the airport, and it looked like “green light time.”

Due to the oncoming winter rain and snow which would turn the job site into a quagmire, if the job was not completed by November it would not be possible to bring equipment onto the site until sometime the following August.

According to Lancour, “even the airport personnel had reservations about us being able to complete the fence contract before the heavy snows hit. In Ironwood, the snowfall totals can exceed 300 inches per year.

“However, we would soon learn that snow would not be our only concern. Rain, rain and more rain, with temperatures ranging from 32 to 40 degrees, many times being accompanied with strong winds, would pose to be another problem,” he said.

There would be two things that would prove critical in getting the job completed, Lancour noted.

The first was finding proper clothing for the employees, who needed to stay dry while working in cold, wet weather eight to 10 hours each day. He said that at a clothing store in Delta Fence’s home town of Escanaba they were able to find insulated rain gear. Delta Fence paid half of the cost of the clothing for the full time employees. This allowed the crews to work without stopping for any rain out days.

The second necessity was the proper equipment. Delta’s widetrack T300 Bobcat proved to be most effective in the low-lying areas when they became saturated with water, he said, while a four-wheel-drive Ford tractor would pull trailer loads of materials where trucks could not go. It could also go through two feet of snow with no problem for framing, stretching, tying, or any other chores.

Lancour noted that Delta Fence successfully lobbied the airport to allow the use of aluminized chain link, rather than 2.0 oz. galvanized. The aluminized fabric, which was supplied out of Merchants Metals’ Brighton, Michigan facility, is easier to install, especially when using the Installink chain link dispensing machinery, he said.

“Weekly planning was more important than ever on this job,” noted Lancour. “When it turned cold we would work in the swamps. When it turned warm we would work on high ground. To keep the equipment operating, college students who had worked for us during the summer in the past were asked to work weekends. We worked seven days a week for the duration of the job, about two-and-a-half months.”

To increase efficiency, barbed wire and tying were done in one operation.

A new barbed wire machine manufactured by L&C Enterprises-USA, Inc. (of which Delta Fence is a division) allowed crews to install three strands of barbed wire along the barb arms tight at the same time, he said.

“Our scaffolding along the side of the tractor allowed us to install the barbed wire to the barb arms while we tied and hog ringed the top half of the fence. Stanley Spenax hog rings were used because of their easy installation tool. For tying, Easy Twist Ties, which are also manufactured by L&C Enterprises, were used,” he said.

The generator, ties and other supplies were kept on the three-point hitch platform on the back of the tractor. The remainder of the fence was tied as the tractor was driven forward.

“As the weather conditions degraded, it became necessary to install a canopy over our tractor during this operation,” Lancour said. “While tying, temperatures were many times in the teens with winds reaching 30 miles per hour. We could not have completed our job without protection from the wind.”

“The Delta Fence and Construction employees really worked together on this job. They held together when the going got rough. Today we are all stronger because of this,” said Lancour.

An interesting sideline regarding Delta Fence and Construction is that it came about because of the activities of L&C Enterprises-USA, Inc.

According to Chouinard, L&C Enterprises- USA, Inc. produces the Installink. This product was developed by the two owners when they were working on a highway job for a different road construction company.

“After this product was on the market and we actually installed some jobs for our customers who had purchased it, we saw a need for Delta Fence to be it’s own company to do everyday fencing.”

The company turned into a “test bed” for the Intallink, whereby Lancour and Chouinard identified on-thejob needs and made improvements to the equipment.

The needs of their own installation company were also the inspiration for the development of other types of equipment which they now offer.

“We installed residential and commercial fencing, as well as a lot of airport and prison jobs, and this is how another product of L&C Enterprises came about,” said Chouinard. “Delta Fence had to install and tie the fabric at a prison, and we decided that there was a need for a preformed tie to make this processes easier for the installer. Hence , the Twist Tight Ties were born.”

As the years passed, accounting issues made it simpler for Delta Fence and L&C Enterprises-USA, Inc. to become one company.

The arrangement didn’t change the operation substantially, except the name. Today, the legal name for the entire company is L&C Enterprises-
USA, Inc. d/b/a Delta Fence and Construction.

“We still find ourselves with a need to develop new equipment, and because we have the capability of installing large jobs, we test the equipment for a period of time, usually a couple years.

Then L&C Enterprises-USA, Inc. will bring the products to market,” he said. 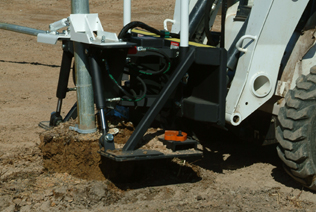 “The Rhino GPD-30 driver is an amazing tool. It saved us 2 days work on our first job.”

“The Installink and preformed ties have tripled our production. You have single handily changed the methods of fence installation throughout the chainlink fence industry.”